What a “bump-stock” is and what it is not… 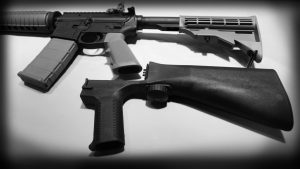 Rohm Emanuel, while at President Obama’s side in the White House once said: “You never let a serious crisis go to waste.”  In typical fashion, after a tragic and horrific attack—long before the facts are known, we hear the familiar drum beat of “Gun-Control.” What’s the sacrificial offering today?  BUMP-STOCKS!!!

Some facts to help you understand this piece of hardware that the news will not tell you:

Do I think that bump-stocks are a good tool? Not really…but is that all it takes to support the ban of them?  I do think some folks find them helpful that have a disability. Do some folks use them other than intended to mimic full-auto fire? Sure, but this is not inherently more dangerous than a person simply pulling the trigger as fast as they can. I am certain that bump-stocks did not make it possible to kill more people. In fact, if it is found they were used, the sloppy way they would have required a shooter to aim may have resulted in more missed targets. In addition, the inevitable jams created by the bump-stock would have kept the rifle out of firing more often. I’m not suggesting that they saved lives, only that if they were used, it did not make the damage worse. Allowing the media, politicians, and hysterical public misstate and misrepresent what these are, is shameful. To offer this piece of hardware up to the anti-gun lobby is a bad policy. I get it…live to fight another day. Meanwhile, the fools feel vindicated in their rhetoric and the root problems are never addressed.

Annie Oakley is Alive and Well